Have you ever wondered if software development and software engineering are the same thing? According to the Computer Science Degree Hub, these two jobs are different in terms of their functions.

Software developers do the small-scale work, writing a program that performs a specific function or set of functions, while software engineers apply engineering principles to database structure & development process. Keep reading to learn more about these two jobs and find out which one better suits your business needs.

Who is a Software Developer?

Software developer is a tech expert who develops, designs and builds desktop and mobile programs and web applications. They are the driving creative force that deals with design and program implementation. Their popularity has recently gone up because of user and business needs and process automation. They are responsible for the entire development process. This job requires collaborating with the client to create a theoretical design.

Software developers use various source debuggers and visual development environments to modify, write, and debug software for client applications. Their responsibilities include documenting and testing client software and writing code to create applications that either stand alone or boost access to servers and services.

Top Skills For a Software Developer

Data Structure and Algorithms is one of the most important skills for modern software developers. Most employers are looking for experts who are familiar with basic data structures, like an array, linked list, map, and set. These are the fundamentals that help developers build applications.

More than half of all organizations use Git and GitHub source code management, so this hard skill is essential for software developers.

All software developers should be highly skilled in cloud computing, since most companies are choosing Cloud to save money and improve their scalability. Tech experts who are proficient in services like Google Cloud Platform are in demand in 2022.

Being a software developer is a lifelong process of continuous learning and improvement. Knowing several programming languages is good, but progress is not always a guarantee, and the skills that are relevant today can soon become outdated. To stay in demand, developers need to devote time to building their skill set each day, analyze their code with a critical eye, and always seek new opportunities.

Your average software developer will be judged by their position, level of experience, and their familiarity with certain programming languages and databases. This list is not exhaustive — a developer must also possess a number of soft skills and competencies to be considered a valuable expert on the job market. 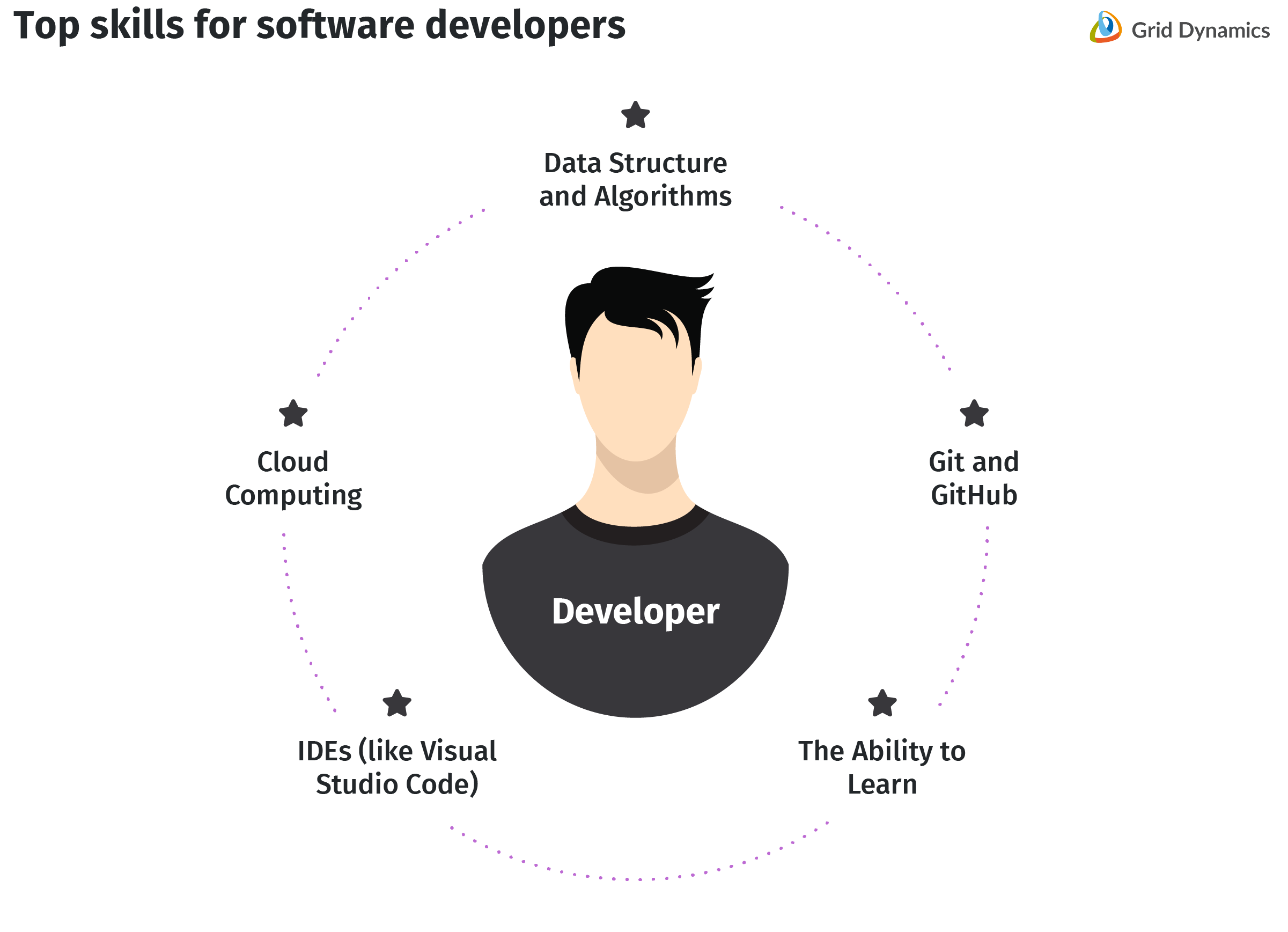 How to Test a Software Developer’s Skills?

Although CVs give you a basic understanding of software developer’s abilities, there are some additional ways to test their skills.

A portfolio is the first thing that helps recruiters understand a developer’s skill level. A portfolio is useful to access the candidate’s experience and see their source code before inviting them to an interview.

GitHub is a place where software developers boast about their ability to write readable code. You would want to look at certain things like the number of followers a developer has, when a developer joined GitHub and the number of repositories they follow.

Potential employers can assess the way a candidate thinks and communicates while they are coding, and it gives a good understanding of how a developer applies logic and even works under pressure.

Who is a Software Engineer?

Top Skills For a Software Engineer

Many software engineers are highly experienced in at least one or two programming languages, however nowadays, they have to be skilled in most modern languages to attract employers and continue to be in great demand.

The list may include, but is not limited to: 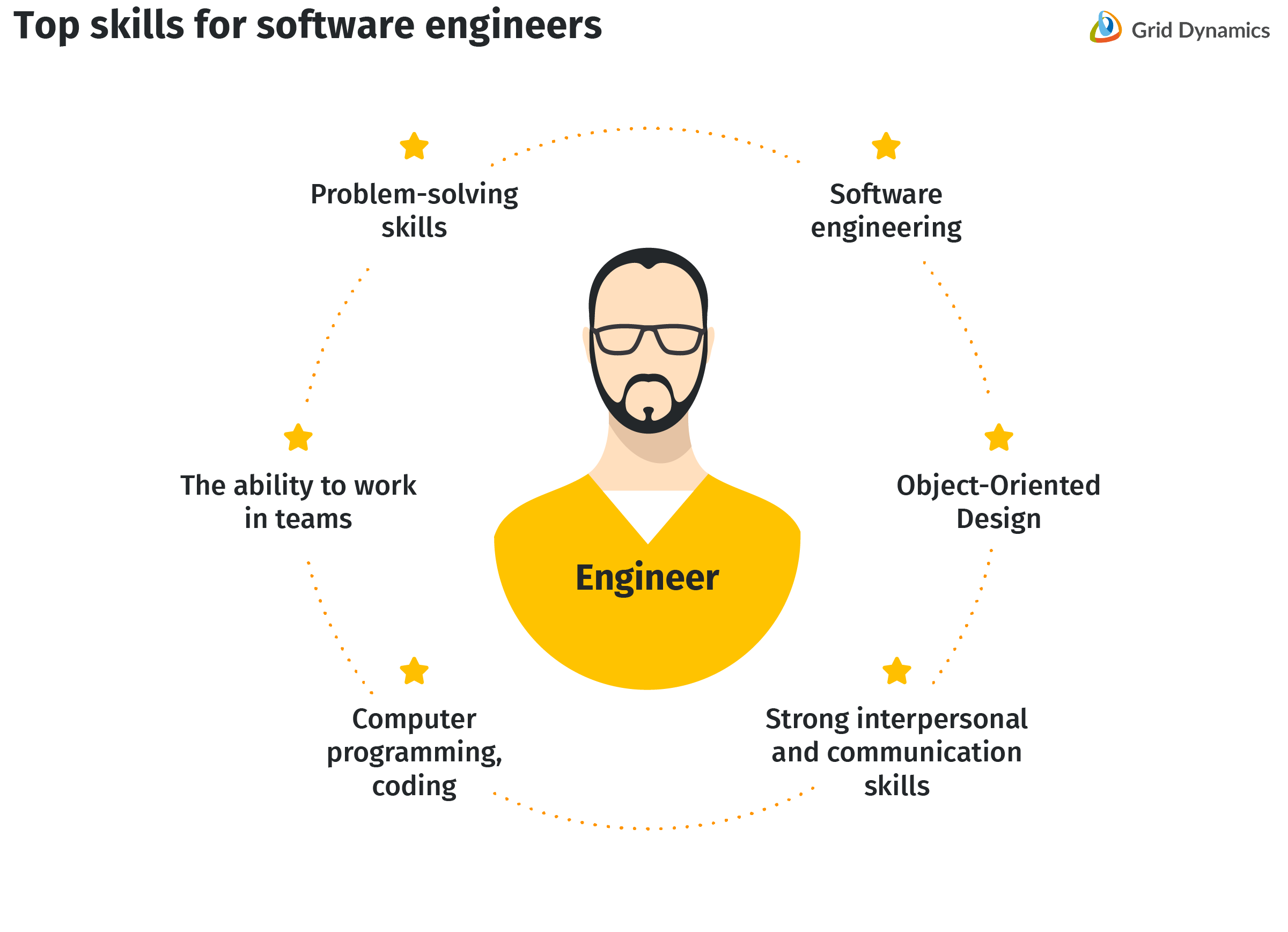 How to Test a Software Engineer’s Skills?

Testing a software engineer’s skills is similar to that of a software developer, since both jobs require an in-depth understanding of code. There are many platforms that help employers evaluate a candidate’s knowledge of the fundamental principles and topics of software engineering like algorithm analysis, linear data structures and computer science fundamentals. The most popular ones are Codility, CodeSignal, TestGorilla, Coderbyte for Employers, Vidcruiter and HackerEarth.

Get outsourcing rates in Eastern Europe, Asia, Latin America, Africa as well as tips on how to choose the country for offshore development.

What are the Main Differences Between a Software Engineer and a Software Developer?

Although these job titles are sometimes used interchangeably, few people know how they differ in terms of their scope, skills and responsibilities. The core difference between the two jobs is that software developers are the creative force that deals with design and program implementation, while software engineers use the principles of engineering to build computer programs and applications.

Frequently asked questions about the difference between a software developer and a software engineer.

The core difference between the two jobs is that software developers are the creative force that deals with design and program implementation, while software engineers use the principles of engineering to build computer programs and applications.

Grid Dynamics is a digital-native technology services provider that accelerates growth and bolsters competitive advantage for Fortune 1000 companies. The company has 15+ years of experience in digital transformation and software innovation, most notably open-source cloud-native programs.

Our clients have the option of choosing the engagement model which best suits their requirements, including team extension, dedicated teams, pod teams, and remote development centers. Grid Dynamics has offices throughout Eastern Europe and Central Europe and Latin America, meaning that we have the resources to cater to the needs of companies of any size, no matter where they are located.